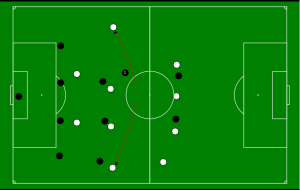 So the greatest show on Earth (if you like football, or soccer…) has begun, and it’s given me some inspiration. Teams from 32 different countries will compete in front of millions (and billions on TV) in Brazil, to win the World Cup. There will be amazing skills, bad behaviour, drama, bad/good luck, love, loss and despair.

Which sounds like a great book – a book that speaks to the inner chimp, that touches all your emotional chords and nuances, and leaves you with great memories (either good or bad, but unforgettable memories nonetheless). It will be a story of great champions and underdogs without a chance, of surprises and disappointments… until Italy wins it ;)!

It also sounds like trying to break into publishing, or selling copies of your book – on one side you have the great historical teams, chock-a-full with stunning players (and their huge salaries) like the big publishing houses with their authors, publicity, marketing departments and big bookstores. On the other side wait the lucky underdogs, hungry, ready to run their hearts out for the chance of a lifetime, the possibility to be seen, to prove themselves against the best – like the independent houses and self-publishers, trying to make their mark and create some noise with their skill. An impossible duel to win?

Certainly a very hard one.

But football is eleven men v eleven man, and books are words v words – you’ve always got a chance, and maybe with a bit of luck, good planning… Besides, playing the game (or writing it…) is too much fun not to give it a go with all you have!

So I’ve decided to have a little World Cup of my own, a mini-game (or more than one in the next few days/weeks, if you like), talking about books like they were footballers or teams, as a way to celebrate football, remember some of the stories that stirred me or made a difference to my writing, and life.

Note: some of the books will be very famous, some relatively unknown – they’re all books that have left me with something (sometimes not good, because I may have not enjoyed them – like that player that you truly dislike, but have to respect the skill or success – Beckham anyone?) It’s skewed towards recent stuff and my favourite genres – and not Classics in the full sense of the word because we can all build a great team with Pele, Maradona, Cruyff etc…

Goalkeeper – 1984, by George Orwell – maybe a little boring, but once you get to know it, it truly stops you in your tracks.

Leftback – Game of Thrones series by George Martin – mean, nasty, ready to stick an elbow into you but it will keep running up and down until you have no breath left.

Center Half 1 – IT by Stephen King – Big, solid, reliable. Never puts a foot wrong, always on its toes.

Center Half 2 – Dune by Frank Herbert – Deep, interesting, always ready with the next answer. Can push into creative midfield or go for the long ball if needed.

Right Back – Legend by David Gemmel – Slim, heroic, the one who will bust its heart to help across defence and midfield.

Left Midfield – The Night Manager by John LeCarre – stylish, but solid and blessed with great pace. The ultimate all-around performer.

Center Midfield – The Darkness That Comes Before – the thinking man’s epic fantasy – it might seem plodding at times, but some of the ideas will leave you speechless.

Left Wing/Striker – The Blade Itself by Joe Abercrombie – classy and rude, full of goals with unparalleled technique that sometimes overpowers, and a little narcissistic.

Striker – Nothing To Lose by Lee Child – It just scores goals, year-in, year-out. The ultimate classy pro. You can always count on it.

Right Wing – The Firm by John Grisham – Reliable, scores a few, good ideas, re-invented the role as soon as it showed up.

And this is a first attempt – feel free to add your suggestions, and I’ll go on along the same theme in the next few weeks.

Football and books – bloody hell, as a certain Mr Ferguson would say!