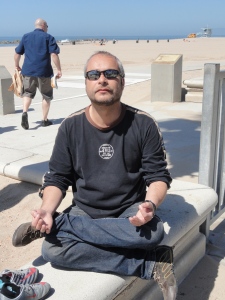 Luca Pesaro was born in Italy in 1971, but he has spent most of his adult life in the US or UK. Being a proud UWCer, he likes to think of himself as just another random citizen of the world.

After spending a few years gaining a degree (LSE) and masters (Bocconi University) in the pseudo-science that is Economics, he got bored, jumped the gun and became a derivatives trader in financial markets, first with the tragic Lehman Brothers, then with a bunch of other banks, somehow always managing not to blow up. He wrote his first novel in Italian in the mid-nineties, but then decided English worked much better for the type of stuff he liked to read and write, and switched. (Easy to do, he has forgotten most of his written Italian).

Recently he has decided to dedicate himself fully to his great passion since the age of eight – writing, mainly Fiction, but anything that amuses him at any given time. Zero Alternative is his first English novel, and he is hard at work on his second thriller, A Game of Kings.

He is married to the awesome Francesca and they have two children, Asia and Joshua, who always manage to annoy, surprise and delight beyond any reasonable expectation.